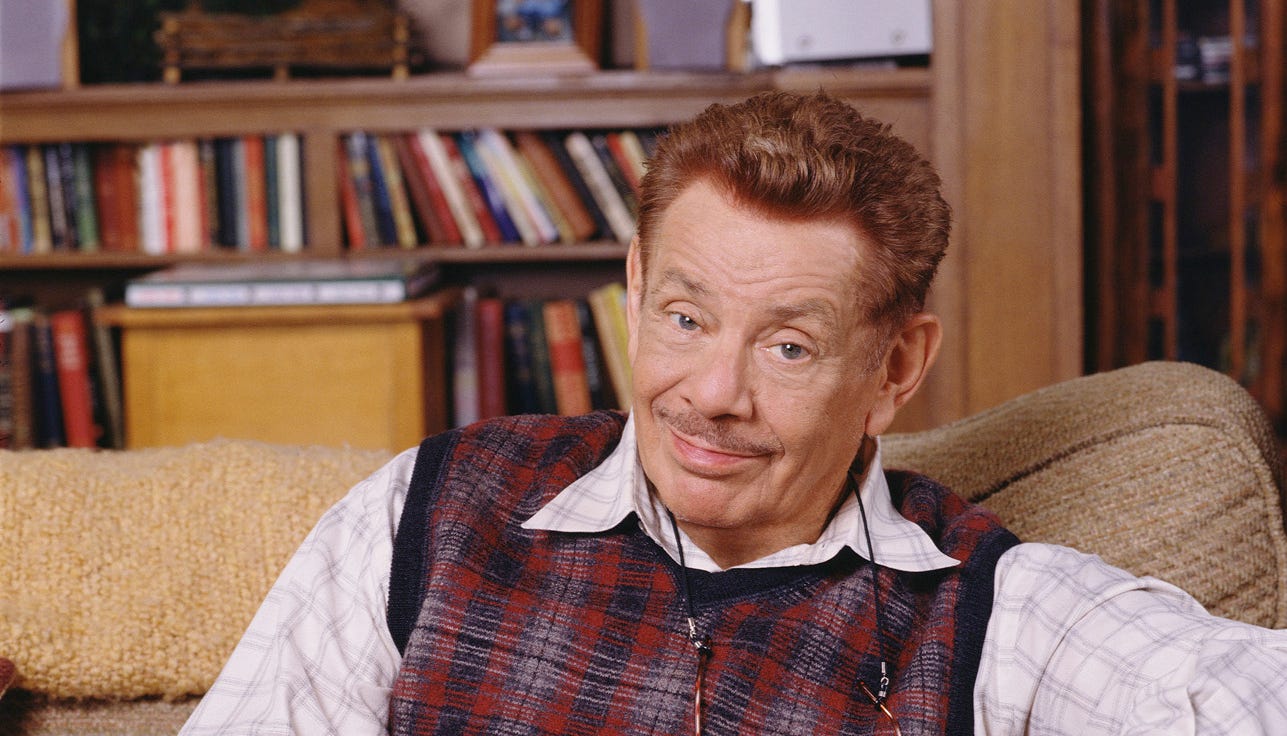 Serenity now! A festivus for the rest-of-us! He stopped short. You want a piece of me?

Jerry Stiller who played legendary Frank Costanza on the highly popular sitcom Seinfeld has died early this morning of natural causes at the age of 92. Comedy legend and a father of Ben Stiller was born on June 8, 1927, in New York City, New York, USA as a Gerald Isaac Stiller. His mother, Bella was a Polish Jewish immigrant and his father, William Stiller, was a bus driver.

After graduating at Syracuse University in 1950., Stiller soon married actor-comedian Anne Meara. Together they formed a comedy team and started performing in nightclubs in New York in the 1960s. They were actually pretty successful comedy duo and although he also appeared in plenty of TV series in his career, he will always be remembered for two characters. The first one is, of course, one and legendary, the unforgettable Frank Costanza in Seinfeld, the best comedy TV show of all time, and the other one is Arthur Spooner in TV show King Of Queens.

The character of Frank Costanza wasn’t that prominent in the first couple of seasons of Seinfeld. Actually Frank Costanza first appeared in the episode The Handicap Spot of season 4 but was there played by actor John Randolph. Randolph got the part after Stiller first refused the role of Frank Costanza on Seinfeld due to his other commitment (he played a role in a Broadway show at the time). As Randolph’s take on the character wasn’t well-received, Larry David offered the role of Frank to Stiller once more who this time accepted it, and the rest is history.

Jerry Stiller first appeared as Frank Costanza in episode 2 of season 5, The Puffy Shirt.  It’s the one in which Seinfeld must wear that ridiculous pirate shirt on a TV as a favor to Kramer’s new girlfriend. Although this was his first appearance he was so perfect in the role that it’s hard to imagine anyone else in the role of Frank Costanza.

Paired with the perfect partner (Estelle Harris who played his wife and George’s mother Estelle Costanza ), his take on the character was much different from Randolph’s and he made Frank one the funniest supporting character on a series. He’ll play the role of Frank Costanza in 26 Seinfeld episodes.

So to say goodbye to this legend, let’s take a look at some of his best, funniest, and most memorable moments on Seinfeld.

George Costanza: What is *that*?

Frank Costanza: Doctor gave me a relaxation cassette. When my blood pressure gets too high, the man on the tape tells me to say, ‘SERENITY NOW!’

George Costanza: Are you supposed to *yell* it?

Frank Costanza: The man on the tape wasn’t specific.

Jerry Seinfeld: I don’t know. Why?

Frank Costanza: Because I’m looking for him. That’s why. He stopped short.

Jerry Seinfeld: What do you mean?

Frank Costanza: In a car, with my wife. He stopped short. You think I don’t know what that’s about? That’s my old move! I used it on Estelle forty years ago! I told everybody about it! Everybody knows!

George likes the bananas! Let him have bananas on the side!

Frank Costanza: Why do you put the bananas in there?

Frank Costanza: SO LET HIM HAVE BANANAS ON THE SIDE!

I sent sixteen of my own men to the latrines that night.

Kramer: C’mon Frank, I need you. I mean the war was fifty years ago.

Frank Costanza: In my mind, there’s a war still going on.

Kramer: Alright, what happened, Frank? What is it that you can’t get over?

Frank pours a shot of whiskey and drinks it.

Frank Costanza: Inchon, Korea, 1950. I was the best cook Uncle Sam ever saw, slinging
hash for the Fighting 103rd. As we marched north, our supply lines were getting
thin. One day a couple of GIs found a crate, inside were six hundred pounds of
prime Texas steer. At least it once was prime. The Use date was three weeks
past, but I was arrogant, I was brash, I thought if I used just the right
spices, cooked it long enough…

Frank Costanza: I went too far. I over seasoned it. Men were keeling over all around
me. I can still hear the retching, the screaming. I sent sixteen of my own men
to the latrines that night. They were just boys.

A festivus for the rest-of-us!

Frank Costanza : Many Christmas’ ago, I went to buy a doll for my son. I reached for the last one they had, but so did another man. As I rained blows upon, I realized there had to be another way.

Cosmo Kramer : What happened to the doll?

Frank Costanza : It was destroyed. But out of that, a new holiday was born. A FESTIVUS FOR THE REST-OF-US.

George Costanza: You can’t ground me. I’m a grown man!

Frank Costanza: You want to live here? You respect the rules of our house. YOU’RE GROUNDED!

Who’s having sex with the hen?

Frank Costanza: Let me understand, you got the hen, the chicken and the rooster. The rooster goes with the chicken. So, who’s having sex with the hen?

George Costanza: Why don’t we talk about it another time.

Frank Costanza: But you see my point here? You only hear of a hen, a rooster and a chicken. Something’s missing!

Mr. Ross: They’re all chickens. The rooster has sex with all of them.

You want a piece of me?

Frank Costanza: You want a piece of me? YOU GOT IT!

Blow out the damn candles!

Kramer: Right here, come on, I’ll show you.. (Gets behind Frank, holding the pool stick with him) Take hold of your stick.. alright, bring it back slowly..

(Estelle walks in with a tray of beverages and popcorn. Kramer and Frank continue the lesson in their underwear as she stares in disbelief)

Frank Constanza: It’s a little unnatural, but I think I’m getting the hang of it.