Notice: fwrite(): send of 265 bytes failed with errno=10054 An existing connection was forcibly closed by the remote host. in E:\Websites\croatiat\shakennotstirredmovies.com\wwwroot\wp-includes\Requests\Transport\fsockopen.php on line 212
 James Bond Girls With Funniest Names - Shaken, Not Stirred

Beside exotic locations, fast cars, over-the-top action, gadgets, vodka martini, and villains with an insidious plan bigger than life, one of the 007 trademarks were always beautiful women. And they were mostly given blatantly obvious sexual names which Austin Powers parodied with women characters like Alotta Fagina, Felicity Shagwell, Robin Swallows, Fook Mi or Fook Yu. In this article, we’ll take a look at James Bond girls with funniest names.

Since Ursula Andress appeared in the first 007 adaptation Dr. No. in 1962, “Bond girl” has become one of the trademarks of James Bond. Over the past 50+ years, there were a lot of Bond girls, from a damsel in distress, scientists, spies to psychopaths. But one thing that almost all of them have in common was their names, sometimes obviously sexual, but mostly funny. Let’s start. 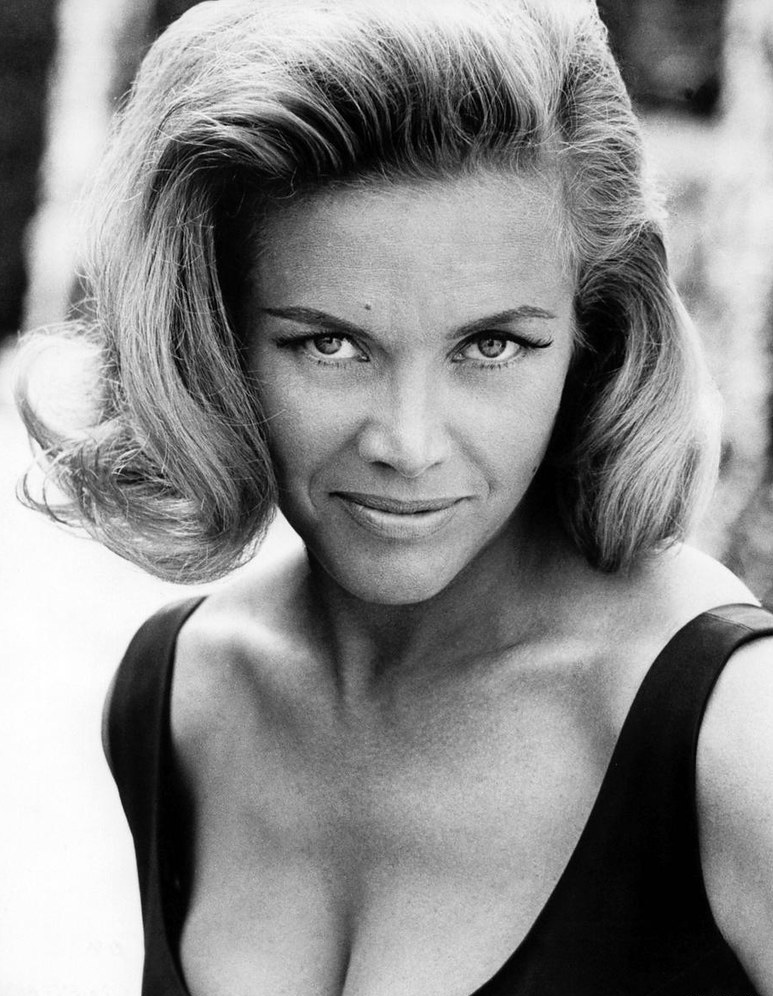 James Bond : Who are you?

James Bond : I must be dreaming.

This was an obvious pick – I mean, her name is Pussy Galore. If that isn’t obvious sexual name, I don’t know what is :). Pussy appeared in Goldfinger (best Connery’s Bond movie) and was actually one of the more capable and interesting Bond girls who was more than a sexual object. She was in charge of a female aviating crew called “Pussy Galore’s Flying Circus” and was at first working with the main villain Auric Goldfinger in his Operation Grand Slam to rob Fort Knox. But eventually, Bond charmed and seduced her so she decides to do the right thing and help the good guys. Played by Honor Blackman (Jason and the Argonauts, Avengers TV series), who was at age 39 (born in 1925 in Plaistow, London, England) the oldest actress to play a Bond girl. 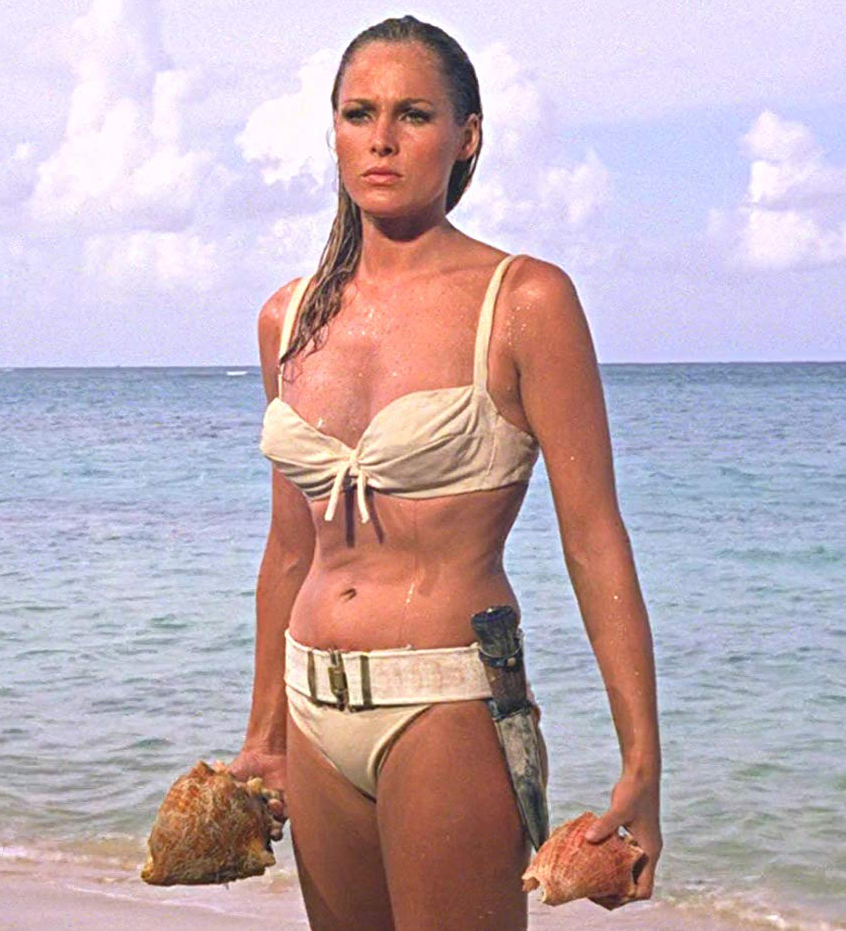 Although not a first woman 007 seduced in Dr. No, Ursula Andress’ Honey Rider emerging from the sea in her bikini made an iconic entrance and set a standard for a Bond girl. Unfortunately, she was more of a damsel in distress and more interesting female characters will follow her in the next Bond movies but she’ll always be remembered as a first Bond girl. 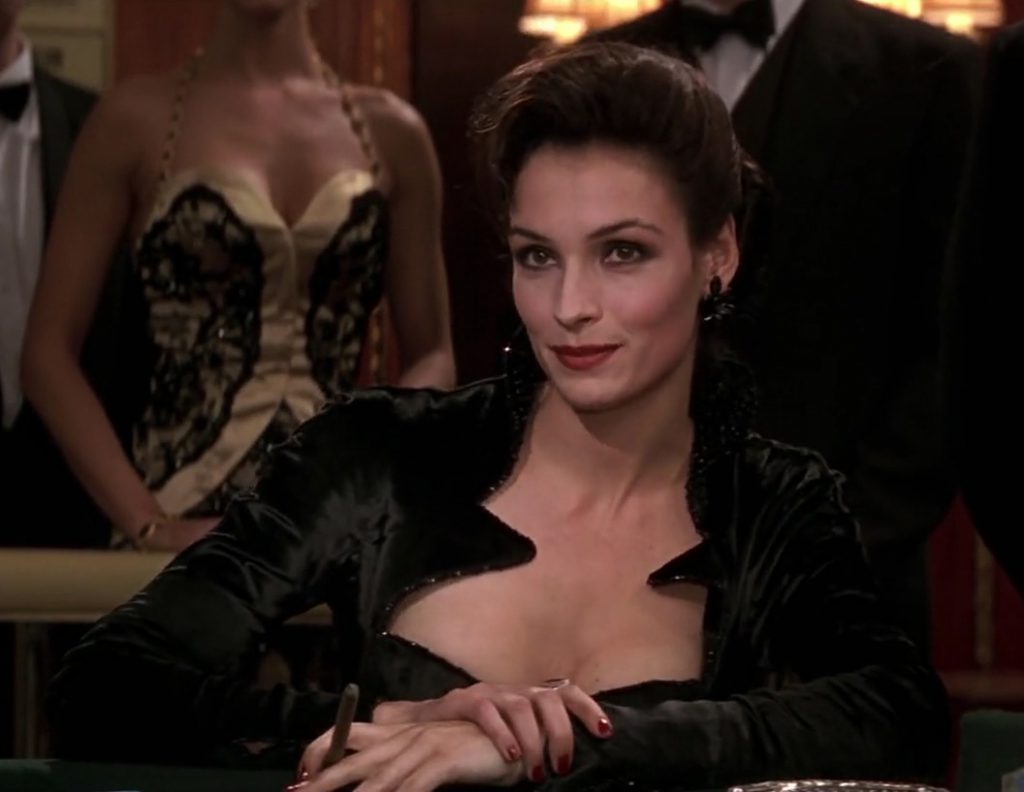 Xenia Onatopp, played by Famke Janssen (Jean Grey from the original X-Men trilogy), is actually a villain and not a Bond girl, but it is one of the more memorable characters and not just because of her name. Appearing in GoldenEye (1995), she’s a former Soviet fighter pilot who joins a crime syndicate called Janus. Onatopp is a  psychopath who takes sexual pleasure through killing or hurting people, and probably the most memorable thing about her is that she likes to crush men between her thighs during sex.

Major Anya Amasova : So, you know who I am.

James Bond : You made quite an impression. 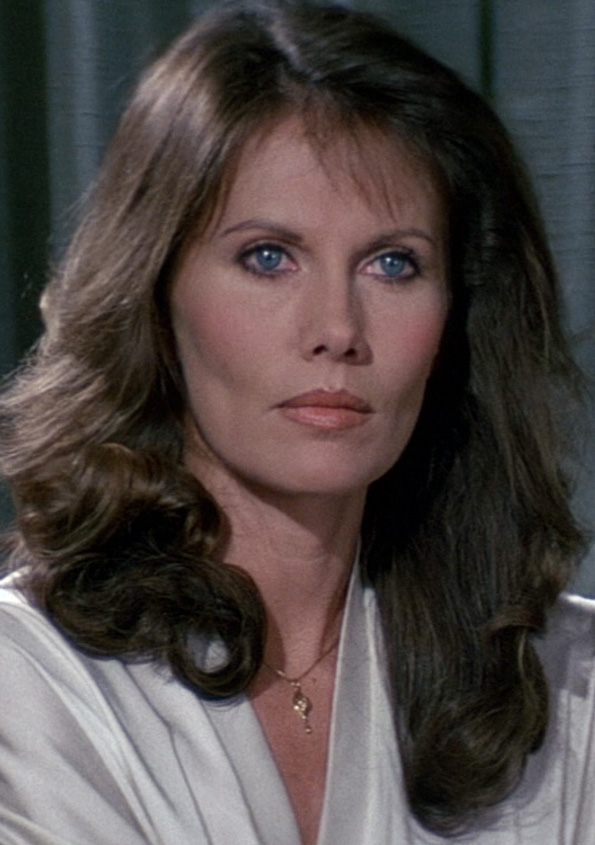 Played By: Maud Adams (Rollerball, The Man with the Golden Gun)

Octopussy : Good evening. I wondered when you might arrive.

James Bond : So you are the mysterious Octopussy.

Octopussy : And you are James Bond, 007, Licensed to Kill. Am I to be your target tonight?

The only actress to play two different Bond girls, Swedish ex-model and actress Maud Adams (Rollerball), appeared in The Man with the Golden Gun (1974) playing the lover of assassin Scaramanga (Christopher Lee) and almost decade later in 1983′ Octopussy playing one of the villains. She actually appeared in one more 007 movie, 1985′ A View to a Kill but just as an extra. Octopussy is the only Bond movie with the name of a female character as a movie title, and although Adams isn’t the prettiest Bond girl (actually she’s one of the ugliest Bond girls if you ask me), Octopussy was one of the more interesting female characters from the Roger Moore Bond era. 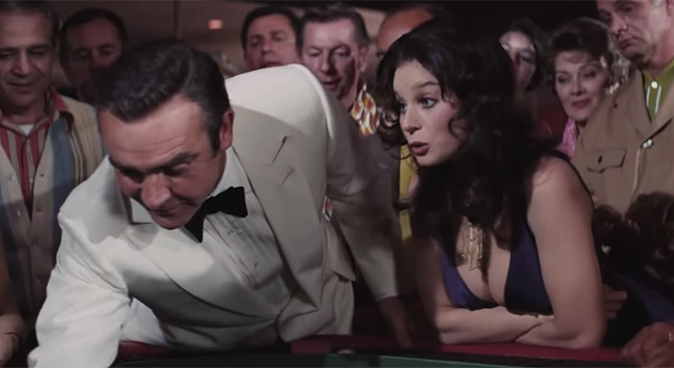 Played By: Lana Wood (The Searchers)

James Bond : But of course you are.

Plenty O’Toole, played by Lana Wood (The Searchers) in probably the worst Bond movie ever, Diamonds Are Forever (1971), is one of the least interesting Bond girls – she works the casino floor flirting with wealthy men. Besides her name and looks, there was nothing memorable about this Bond girl. Same goes for the movie – although it had one of the best James Bond songs of all time (Shirley Bassey) and featured a last (official) appearance of Sean Connery as agent 007, Diamonds Are Forever is barely watchable, cheap mess of a movie that doesn’t even feel like a Bond movie with one of the worst villains in the history of cinema (Mr. Wint and Mr. Kidd).

Christmas Jones – Denise Richards, The World Is Not Enough (1999) 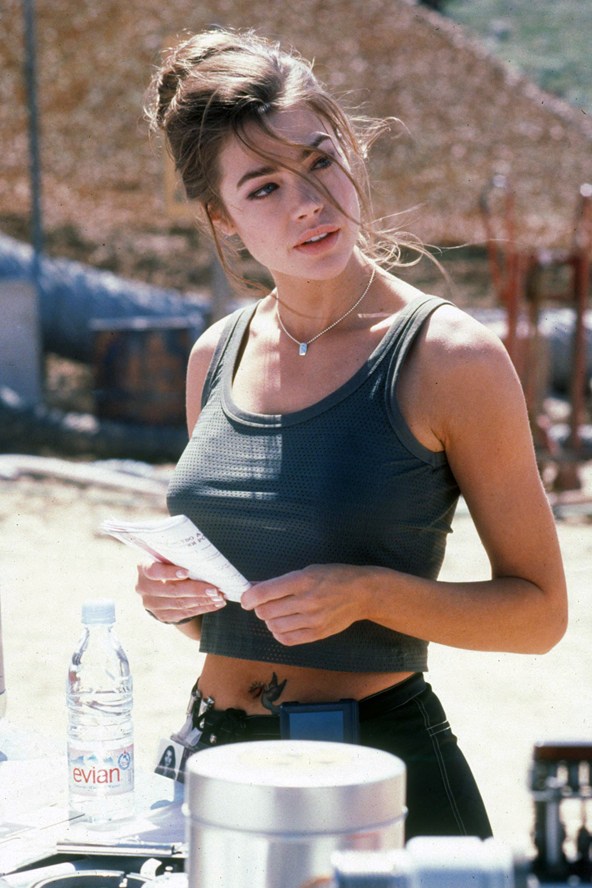 Christmas Jones, The World Is Not Enough (1999)

Dr. Christmas Jones : Are You here for a reason? Or, are you just hoping for a glimmer? And you are? 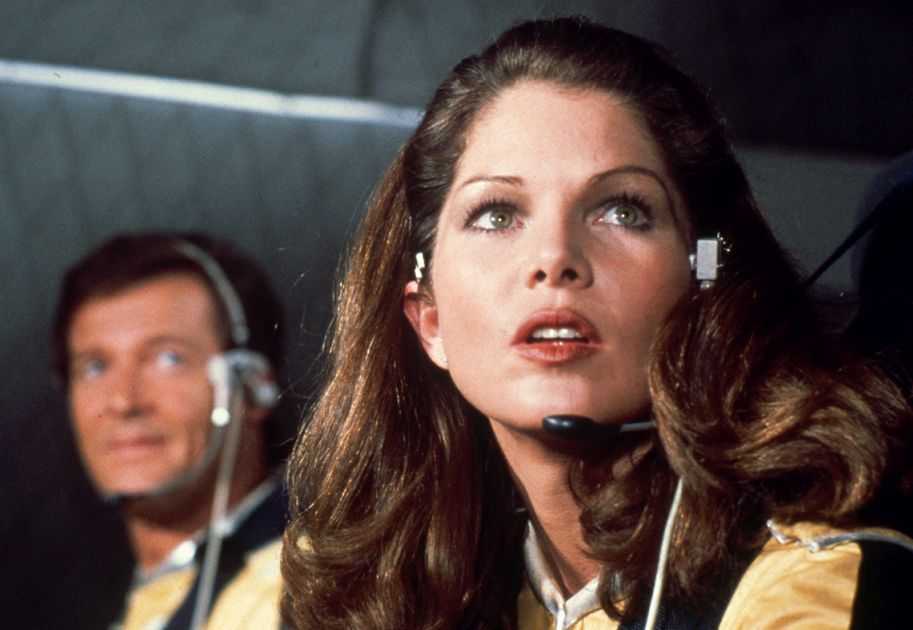 Played By: Lois Chiles (Death on the Nile, Broadcast News)

Dr. Holly Goodhead : Your powers of observation do you credit, Mr. Bond.

Dr. Holly Goodhead is a CIA agent and astrophysicist from Roger Moore’s Moonraker (1979), working on the same case as 007 – theft of the space shuttle Moonraker. Played by Lois Chiles (Death on the Nile, Broadcast News), Holly Goodhead is actually more than just a pretty face and a valuable asset to Bond as she has some skills that 007 doesn’t. Influenced by the first Star Wars movie, Moonraker, or that James Bond movie in space, was a silly movie featuring this terrible laser battle in space. 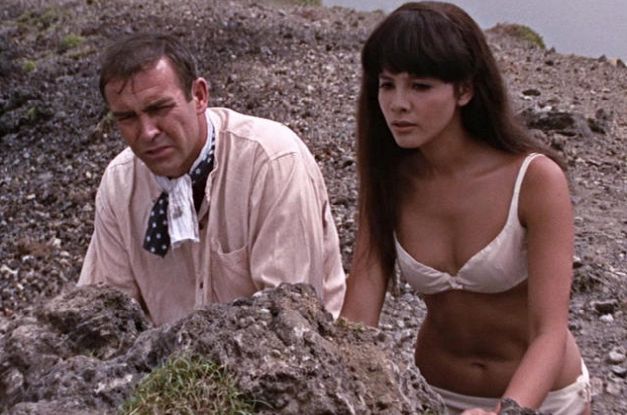 One of the Bond girls with funniest names is definitely Kissy Suzuki. Played by Japanese actress Mie Hama (King Kong Escapes) in 1967′ You Only Live Twice, Kissy Suzuki is a ninja agent, working for Tanaka, who helps agent 007 in his fight against SPECTRE. Mie Hama was originally supposed to play a bigger role of Aki (played by Akiko Wakabayashi), but as she had trouble learning English, producers decided to swap their roles. One of the least interesting Bond girls. 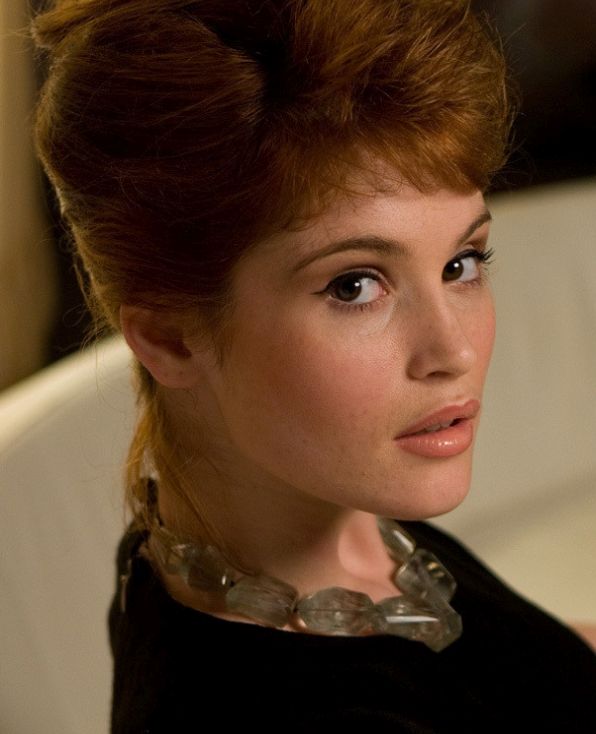 Played By: Gemma Arterton (Prince of Persia: The Sands of Time Clash of the Titans Hansel & Gretel: Witch Hunters) 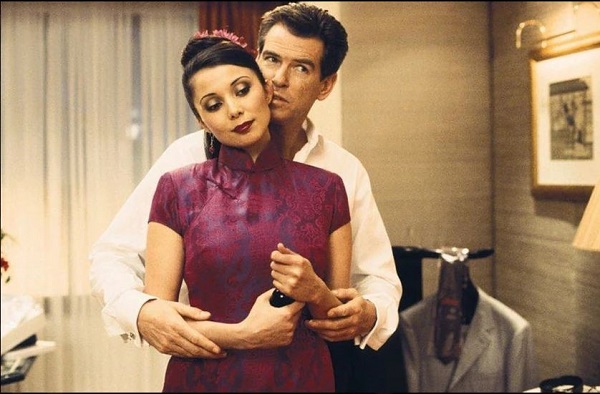 Peaceful Fountains of Desire : On the bed please. Face down.

Played by Rachel Grant, Peaceful Fountains of Desire is a Chinese agent posing as a masseuse at the Royal Rubyeon Hotel in Hong Kong. She only made a brief appearance in Pierce Brosnan’s Die Another Day (2002) but with that name earned a spot on our list. 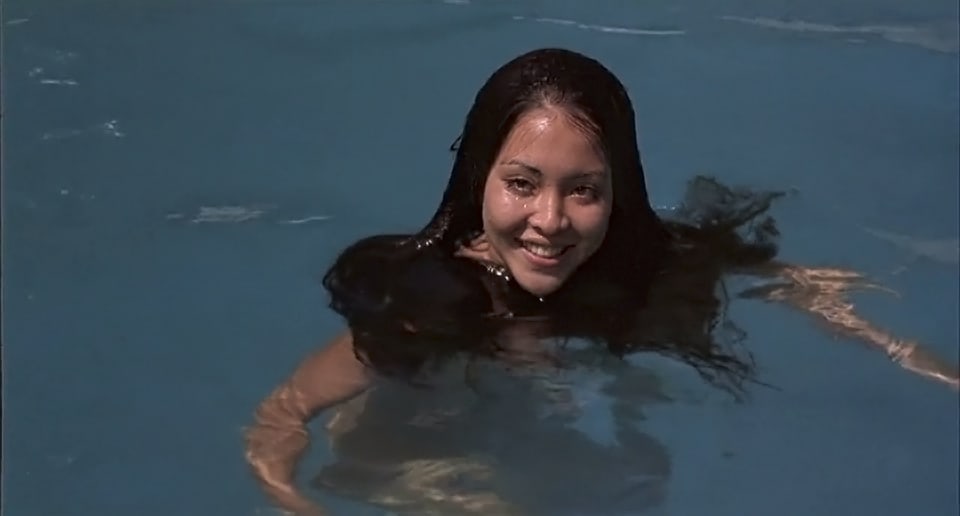 Chew Mee : Why don’t you come in and find out?

James Bond : Really? Well, there’s only one small problem. I have no swimming trunks.

Chew Mee : Neither have I.

Chew Mee, played by Francoise Therry (her only acting role) is a minor Bond Girl in  1974′ The Man with the Golden Gun. Although she had only a short appearance and interaction with James Bond we decided to include her on our list. I mean, Chew Mee :). Agent 007 meets her when he arrives on Hai Fat’s estate posing as assassin Scaramanga. Bond sees Chew Mee swimming nakedly in the Hai Fat’s pool and she asks him to join her but are interrupted by Hai Fat. Chew Mee was probably an inspiration for Austin Powers girls Fook Mi and Fook Yu.